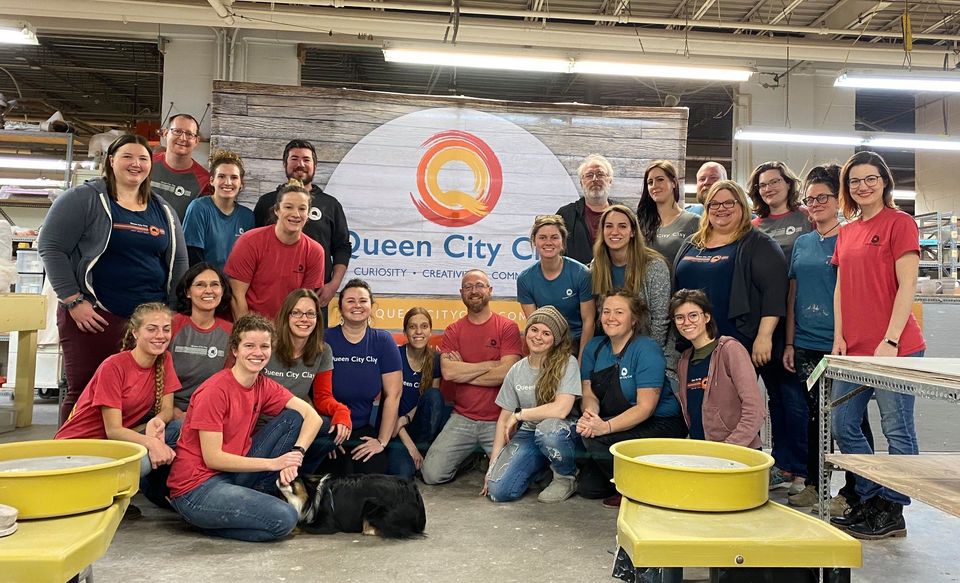 I am the president here at Queen City Clay, or “Leisure Consultant”, as my older brother liked to call my position.  I have the best teaching staff in all the land and love working with them and our incredible student community on a daily basis.  I am pretty loud at all times so you should be able to find me in the studio.  Some might consider me a good looking rebel that plays by his own rules, while others use the endearing term “dork”.  I went to DePauw University for undergrad and got a degree in English (yes, English.)  I then went to Wichita State for my M.F.A. in clay.  I work mainly on the wheel and create sculpture as well as functional forms.  My wife is a UC professor and we have three great kids.  Come in and say “hi” sometime.  I would love to show you around! 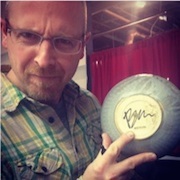 Chrissy is our lead handbuilding instructor and studio administrator.  She graduated from Miami University and is the polar opposite of a sorority girl.  She has been hardened by northern Ohio winters and raising two kids and a husband.  Chrissy has now taught herself web design and analytics which means she is the only one who can control the robots. We all do exactly as she says, when she says it.  She also happens to be a brilliant teacher and her students tend to say “Well, that’s not how Chrissy does it”  when we help them outside of class.  We are all convinced that if she wasn’t working for us she would be paid to sit in a room and solve the world’s problems, two at a time. 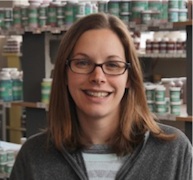 Dirty Sculptures, saucy comments, oversize sunglasses…classic Beth.  Beth came to us straight from the Rhode Island School of Art and Design, or Fancy Pants School as we like to call it. She has a very cool husband and two awesome boys (who also look very hip in big sunglasses!) She’s in charge of major accounts and seems to be able to handle ANYTHING!  We put her in a straight jacket and suspended her over a shark tank right before we opened…she still beat us to the first customer.  Aside from her sales prowess, Beth is also a great teacher and all around ceramic artist. She forgets half of what I tell her but I just realized that’s called “Selective hearing!” And to be fair, I say a lot of ridiculous things. Come in and say hi because we love her and we know you will too. 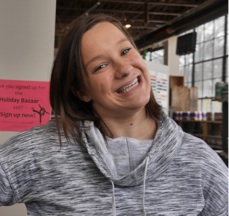 Jon started working here when he was three. When the studio rented it’s first space, Jon was just there, waddling around, drinking bourbon, and making pots. He left us for a small amount of time after getting his B.F.A. at Northern Kentucky University. We don’t really speak of this time but apparently he like, studied in Japan, got an M.F.A from Utah State, taught at SUNY Oneonta, ran a small public studio, did some residencies…blah blah blah. But we always said he would be back when our local distilleries had enough bourbon in their stockpiles. Aaaannnnd he’s back! Jon is running our education department which includes everything my wife won’t let me do anymore. This works out really well for my marriage AND the studio because aside from being a very talented teacher, he is also incredibly well versed in firing techniques and materials so if you are looking for answers; bring your clay thoughts to Jon.  There are things Jon isn’t good at though…..like…..sports and …accepting other peoples opinions. We like him that stubborn though. He gives us street cred! 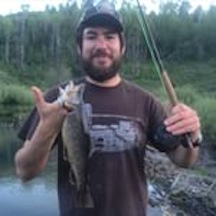 Before John was hired to manage all of our firings, clay production, and warehouse, he was an exotic dancer. Lumberjack John they called him. We knew this was going to be a bonus when we hired him but we were completely off base on the REASONS why. John’s amazing flexibility and military style workout regimen make him uniquely fantastic at loading pots without breaking them, maneuvering the carts with dance-like flow, calming impatient artists who want their work fired immediately, and spinning effortlessly back and forth between the clay mixer and the pug mill. It’s beautiful to watch…….we should sell tickets. John also runs the alternative firing program which has seen huge growth since he took over. Get your mind out of the gutter. HIs eyes are up here! 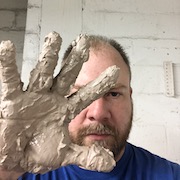 Kirk is one of the craziest people any of us have met.  He can make you think about the world in a completely different way (as long as you understand what he says).  In the last few years, Kirk has tripled the size of our sculpture program.  His students tend to find their voice quickly and never look back.  Please don’t lay any snacks down beside him while you are in the studio.  He has two hollow legs and, much like a stray cat, if you feed him once he might follow you home.  People who feed him do tend to get their sculptures through the kiln faster.  Food for thought. 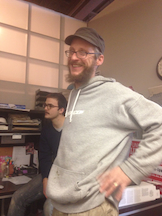 We actually don’t want Phil to teach at all.  We just want him to cook all day and night so he can bring us leftovers.  Phil’s brisket is AMAZING…and to be honest…so is his glass work.  Mr. Taylor joined the program a few hundred years ago and we couldn’t be luckier.  He has started a glass program while also looking after our glazes and helping to maintain this massive building.  We think he should be living in Portland Oregon because he puts birds on all of his pots, but we love him anyway! 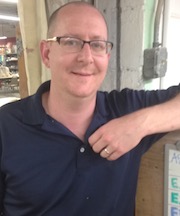 Tony Weiss has been with us for several years now.  He is what we like to call a “SUPER VILLIAN”.  He is evil to the core and likes to make things like blood ice cream.  We can’t deny his talent when it comes to pottery, carving, and sarcasm.  Aside from being addicted to weird role-play board games, Tony graduated from film school and produces all of our YouTube videos. He’s definitely a lovable villian and tends to bring out great things in students.  Bring your friends in for an open wheel session and experience Tony in all of his evil glory.  All joking aside, Tony has become a very good teacher and a key part of our studio team……..a key EVIL part. 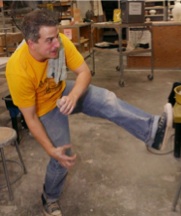 Lindsay Garrett helps with our special events and open wheel classes.  She started out as a talented clay student with impeccable morals and an infectious look of surprise whenever she heard something offensive or dirty.  In fact, we love that shocked look so much that we kept trying to say ridiculous and horrible things to make Lindsay’s jaw hit the floor.  Aside from developing an amazing tolerance for filthy language and terrible people, Lindsay has somehow remained……good!  She is an animal lover and defender, an avid runner who has completed two “Tough Mudder” courses, and a brilliant artist with skills to match.  She makes us want to be better people…..almost.